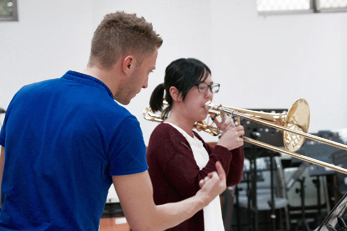 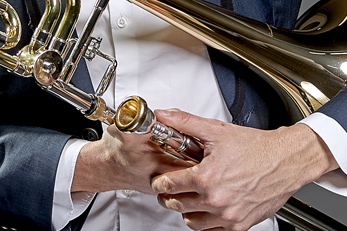 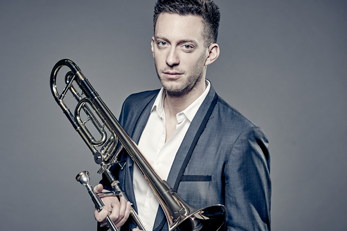 Nicolas Moutier is recognized as one of the most brilliant musicians of his generation.

He entered the Paris Conservatory (CNSMD) at the age of 17, where he was awarded the Trombone Prize (1st nomination, special mention of the jury) and chamber music Prize, then entered the « cycle of Perfectionnement Concertiste » (special education for soloist).

In February 2015, he performed at the « Victoires de la Musique Classique » live on France 3 tv channel.

In January 2013, Nicolas Moutier and Michel Becquet performed the world premiere of the double concerto of Rémy Abraham “Les Frères Montgolfiers” which will be recorded for a CD release a few months later. In April 2014, Pierre Thilloy composed “Magma” for Nicolas Moutier with brass band, and in June 2015 he created “Trombonissime” with Denis Leloup: a unique sound object confronting classical and jazz accompanied by the jazz trio Hervé Sellin and the Strasbourg Philharmonic.

After working with the Toulouse Orchestra (as a winner of the Aïda competition), Nicolas Moutier became Solo Trombone Solo of the Musique de l’Air in Paris (France air force orchestra).

Since June 2006 Nicolas Moutier holds the position of Solo Trombone of the Strasbourg Philharmonic.

He was a member of the Feeling Brass Quintet for more than 7 years. He was involved in musical theater with the Opus4 quartet in 2008 and became the first trombone of the Namestra ensemble in 2010.

Nicolas Moutier is professor at the Strasbourg Conservatory and at the high school « Haute Ecole des Arts du Rhin ».

He also teaches at the Eurocuivres academy, and gives masterclasses in all the world (Russia, Czech Japan, Taiwan).

Nicolas Moutier is the initiator of several original projects: Vice-President of the french national association “Association des Trombonistes Français”, he is one of the organizers of the International Trombone Festival 2012, the president of the European Festival of Trombone 2014, and also the creator of the website which has now become a professional reference: « Le site du trombone ».